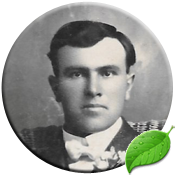 12 September 1880: Felix arrives in Philadelphia, Pennsylvania, USA at the age of 1 year 6 months.

27 April 1931: Felix, at the age of 53 is placed on probation after police had several complaints of young people of high school age were securing liquor at Felix’s place in Brown County, Wisconsin, USA.

27 May 1931: “Felix Gillis, 1612 Willow St, sentenced to 60 days in the county jail in Police court for selling beverages without a license, will serve 90 days in the workhouse instead.

Some time ago, Gillis was brought into Municipal court on charges of contributing to the delinquency of a minor. He was released on probation on condition that he get out of the “soft drink” business and stay out. His arrest by the police constituted a violation of that probation, which was revoked Tuesday afternoon and he was sent to the workhouse. This sentence takes precedence over the 60-day term imposed in Police court, but it is expected that the two terms will be taken to run concurrently.”